I’ve widened the width of this blog! Yay let’s all have a party! Ok it’s not that big a deal but it does mean I can fit some Amiga size screenshots in now without having to scale them down and in the process  losing that retrotastic scanline effect I like to add.

To start it off here’s something I found recently from 1994. It’s an old screen mock up of a game I was going to do with a couple of old mates of mine called TMR-II for the PC. For those interested the art was drawn using Brilliance on an Amiga A1200. 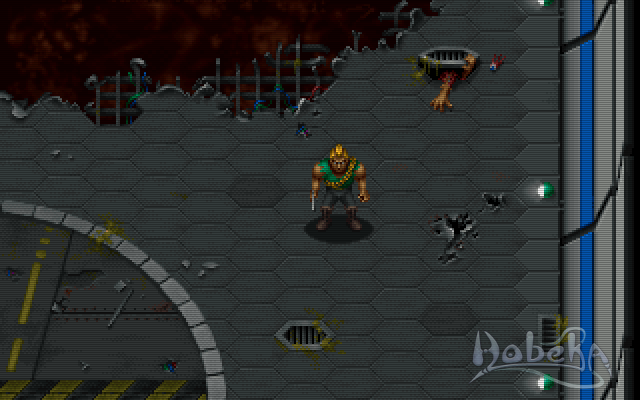 Looking at the width I still think there’s some adjustments to be made but it’s better than it was. Only real tweak I’ve had to make so far was the blog header which needed expanding to cover the extra space.

I almost forgot there was also a female character called ‘Paris’. Can’t think why I did a lesser clothed version? Hmmm…

**** UPDATE ****
Me mate Gary Symons just reminded me that the game was based on an old arcade title called ‘Search and Rescue’ by SNK which I was aware of at the time but due to creeping old age had totally forgotten about.. So to remind me and anyone else who is wondering, which is probably about 3 people here’s a youtube clip  of said arcade game being played.

I saw SaR in Butlins when I was 6 or 7 years old and I've been wondering what game it was ever since. The way the 'sploded aliens sort of sluice through the grated floor has always stayed with me.

Thanks Stoo! Lovely art by the way! I don't just mean the boobylady.

Yes it's one of those games which sadly has sort of fallen through the net of recognition over the years.
I'd still like to make a game based on SaR as the ideas we had were pretty cool at the time. With current systems the possibilities are mind blowing for a modern take on it.

I never got round to animating her unfortunately. lol