I realised the other day that I’ve spent most of my professional life drawing digitally. When I say digitally I refer to the creation of graphics (mostly for games) on a computer screen using a graphics program without a pencil or sheet of paper in sight!

As a child (still a child some in the know would say) I used to enjoy drawing and painting, what child doesn’t? I sketched, painted and even managed to fail my art ‘O’ level for taking too long in the exam(ever the perfectionist). Then I discovered video games and thus my digital artistic journey began and my artistic endeavours switched from the analogue world to the digital. Commodore 64 sprites and character sets in glorious chunky fat pixels became my new canvas!

Fast forward a few years and the advent of graphics tablets and art applications introduced a whole new way to create art digitally. Don’t get me wrong I’m a huge advocate of this technology but there’s something rewarding in using a pencil, a pen and a splash of water colour that never fails to make me smile. Maybe I’m becoming less geek as I get older? Perish the thought…Next I’ll be growing my own veg and painting sheds.. (Did I tell you we’ve got a new shed and I’m growing pumpkins this year?) 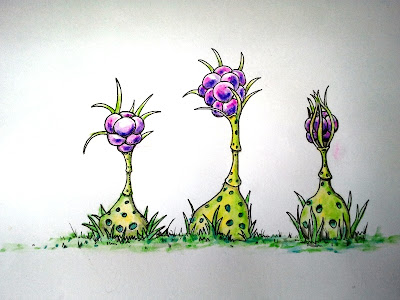 Take this recent illustration which started out as a pencil doodle and ended up as a new plant species in the Blobbit World, inked in and water coloured with Blobbit friendly hues. I asked my son Jack to come up with a name and he suggested Bloobelly Spikey plant which almost felt right so after further discussion we ended up with the title Blooblee plant!

There’s something about water colour that just works for me… simple yet effective!
And with that thought next week I shall be painting in a cave using chalk and water… and talking of caves I don’t believe that Bin Laden died this year.. 2001 seems more likely surely? Here’s the most excellent James Corbett with a pretty good summary of why I like many don’t believe the ‘official’ story.